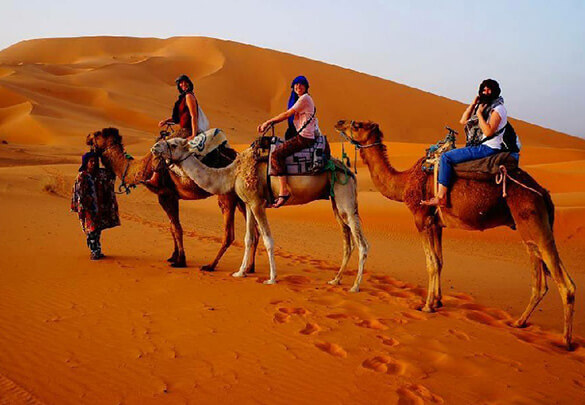 Private Tour Guide Morocco: The ideal journey to Morocco begins at Casablanca’s modern airport. You can explore the medieval alleyways of Fez (the largest car-free zone in the world!), the towering sand dunes of the Sahara desert, the sea-breeze blue & white of the Portuguese port city of Essaouira and finally the metropolitan ancient and modern blend of Marrakesh.

In the Imperial city of Marrakesh, Golf courses are open-faced to the High Atlas Mountains and shopping is both an adventure and a reward. You can ascend into those grandiose mountains for hours or days of hiking among the ancient Berber villages, where people remain quite removed from the modern world. Perhaps you prefer to spend a few nights under the jeweled carpet sky of the Sahara Desert.

Whether you prefer to stay in a quiet Riad (an ancient dwelling transformed into guest house) or a modern hotel, Morocco offers an incredible variety of accommodations.

The food in Morocco is delectable, a tantalizing mash of African, Arab, French and Berber with exotic spices. The ancient city of Fez is considered to be the epicurean capital of Morocco and is an extraordinary experience on many different levels.

With a topography very similar to California, Morocco offers some of the highest mountains in the world, thousands of miles of beaches along the Atlantic and Mediterranean, the infinity of the Sahara desert, as well as river valleys and endless expanses of olive groves and orange trees.

Fez features one of the oldest universities in the world and is considered to be one of the top five most sacred sites in the Muslim world.

Shopping in general is a fun and indulgent pastime, whether you venture into the desert towns or the Souk of Marrakesh. Be ready to drink a cup of tea and bargain your way to a price you are happy with! Try to set a price in your mind before you begin haggling with the merchant, and remember – they do expect you to haggle, and they are very experienced! Don’t be intimidated, it’s just a friendly game.

You can participate in all different kinds of surfing along the Atlantic coast, and the Mediterranean coast is famous for its Thalassa spas.

Another exciting destination is the Blue City of Chefchaouen in the Riif Mountains, where generations of Berbers play the music discovered by Bryan Jones and the Rolling Stones. This is where the Master Musicians of Jajouka have lived for generations beyond recall.